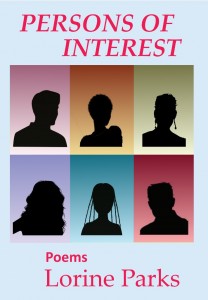 Los Nietos Press is proud to announce the publication of Persons of Interest, the latest collection of poetry by Lorine Parks.

Parks is a prolific writer who finds subject material in daily events and news stories. Although she studied classical literature, her first published book, Catalina Eddy, was fanciful personification of the many manifestations of Southern California weather in the form of a mafia family. For her latest collection she draws on her classical roots, but also from her many years as a professional travel consultant, to explore fascinating individuals throughout history, and to weave a woman’s perspective to this expansive cross section of life.

“Persons of Interest is a fascinating, chilling and remarkably clear-eyed navigation along the tightrope world that we all must walk.” –FRANK KEARNS

“Among these poems we get, as part of the bargain, the wonderful “Old Woman”series. Women of all ages will empathize. Women writers of all ages will be jealous they hadn’t thought of it first. I know I am.” – SUZANNE LUMMIS

Lorine Parks will be the featured reader at POETRY MATTERS,  the monthly poetry reading that she curates at STAY GALLERY.  Her reading will take place on February 19th. Doors open at 7:00, open mike begins at 7:30. 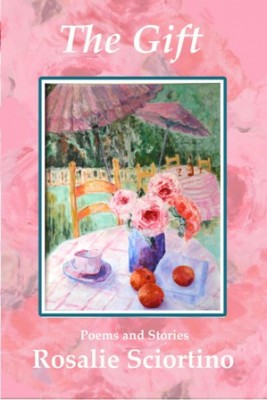 Downey Native to be Featured Poet

Downey poet and artist Rosalie Desimone Sciortino will be the featured reader for Poetry Matters, Thursday, January 15, at Stay Gallery.  Her work over the years has had an impact on the Downey arts scene in many ways.   Sciortino was a leader in Writers Workshop West (a writing group spearheaded by theater director John Hume), and a board member of the Downey Art League.  She has often been a contributing writer to the Downey Patriot, and before that the Downey Eagle.  Doors will open at 6:30 PM for a reception, and her artwork will be on display for a week.

Reflecting her wit and creativity, Sciortino’s new book, The Gift, includes a whimsical short story and several memoirs of her Downey childhood, in addition to her lyrical poetry.  Her poems convey her love of nature and reflections on the human spirit.   “Her gift is the transformation of the common to the uncommon,” writes poet Zaida Ramos.

Sciortino is a virtual native of Downey, having arrived here with her family when she was just twenty days old.   Her parents, who met and married in Colorado after immigrating separately from Sicily, settled into a farmhouse with acreage at the corner of what is now Paramount and Florence where the Chase Bank sits.

At that time Paramount Blvd, known then as College, dead-ended at Florence, and vehicles were only able to turn east or west.  Sciortnio recalls that loaded hay trucks would shake the timbers of the house as they rolled to a stop at the corner.

Sciortino was the youngest of seven siblings, with her neighborhood defined by orange groves,  sooty air from smudge pots, irrigation ditches, and the “magical sylvan retreat” of the Rio San Gabriel river bed.  Relatives from Los Angeles described their weekly visits to Downey as “a trip to the country.”

In the 1970’s Sciortino was an active member of the Downey Art League when the organization’s membership was at its height.   She explored a variety of media, including oil, collage, and acrylic, winning numerous prizes.    Her subjects range from stylized still-life’s to realistic figures and cityscapes.

While writing and painting were her chosen vehicles for expressing her love of nature and beauty,  Sciortino’s creativity was not limited to these art forms.  Fans of talk radio on KABC in the 1980’s remember Sciortino’s comedic call-in’s to the morning Ken and Bob Company show.   Listeners were invited to win prizes by calling in with explanations and descriptions of common terms.  Sciortino would call in so often that she would change her name, but she could not disguise her voice.   She recalls that her husband’s golfing buddies would tell him, “Your wife’s on the radio again.”

As an avid KABC listener, Sciortino’s prize-winning success was legendary.  She twice won tickets to an opening game of the Dodgers, several dinners at high-end restaurants in Beverly Hills, and tickets for the Cirque de Soleil when it premiered during the Los Angeles Olympics in 1984.

Sciortino’s impact on the Downey art scene extends beyond her own writing and painting.  Sciortino has contributed years of community service as a member of the Downey Symphony Guild, helping with fund-raisers that support the regular season concerts and the Music in the Schools program.   The music education program, started in 1995, serves 11,000 local elementary students in the area’s public and private schools.