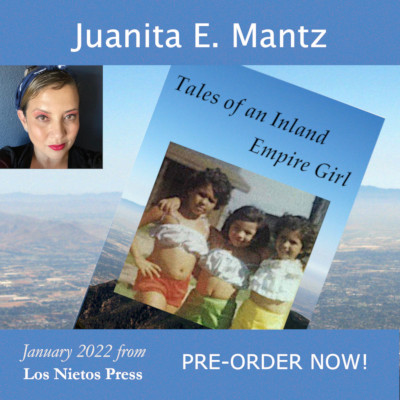 Now Available for Pre-Order!
Tales of an Inland Empire Girl

Tales of an Inland Empire Girl, the YA novel by Juanita Mantz, will be released January 7th!

Jenny, her barely-younger twin Jackie, and their baby sister Annie try to navigate their parents’ troubles. The story zooms in on Jenny as she descends from stellar student to angry punk rock dropout, hiding in shame under the high school bleachers as her twin sister graduates from high school. It’s the story of Jenny hitting rock-bottom, and finally, slowly picking herself up and starting to put the pieces of her life back together. 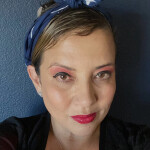 Juanita E. Mantz (“JEM”) is an alumna of the Voices of our Nations Arts Foundation and the Macondo Writers Workshop. She has been published widely, including in The Acentos Review, Aljazerra, As/Us, The Dirty Spoon, Entropy, Inlandia, MUSE, “San Bernardino, Singing,” and Riverside Press Enterprise, among others. She has presented at the UCR Punk Conference, AWP, and Beyond Baroque.

You can find out about her podcasts and more at https://juanitaemantz.com.

What people are saying about Tales of an Inland Empire Girl.

“In her first novel, Juanita E. Mantz goes back to the old house to unshackle the ghosts that still inhabit the charred curtains and broken windows of her youth.  We meet The Wonder Twins, a Wolfman Jack stand in, The Flintstones, a young Wonder Woman with tinfoil wristbands & Nancy Drew incognito via unexpected introductions into Mantz’s life growing up in The Inland Empire.  This is as creative as autobiography gets without veering from the hard truths herein.  Maybe you saw the cartoon once, and thought it fantasy, but read this book and then firmly believe that underdogs can fly.”
—Dennis Callaci, author of 100 Cassettes

“Tales of an Inland Empire Girl is a searing, beautiful memoir that illuminates the struggles of parents who are beaten down by life and their arduous working-class jobs and of children who are trapped in the middle of their parents’ battles. A compelling read—raw, honest, and hopeful. I wish this book existed when I was growing up. It would have been my life preserver.”

—liz gonzález, author of Dancing in the Santa Ana Winds

“In Tales of an Inland Empire Girl we know we are in for a bumpy ride from the very opening pages of the first story, “A Shit Day,” which recounts the author’s journey home to Southern California’s less-than-glamorous Inland Empire from her high-powered attorney life in San Francisco, arriving at grungy “Ontario, the kind of airport no one wants go to.” The purpose of this visit: her father is dying. From this gripping opening, Mantz takes readers into a deeper journey of a childhood and coming of age filled with turbulence and tight-knit family love, and she writes with blazing grit, flashing joy-de-vivre, and an occasional comic overtone that feels natural coming from this self-professed punk-rock girl. This collection of stories spares no stone unturned, no watershed truth – both hard and celebratory – unexamined. And through it all, shines an anthem call of what matters most in life: the unbreakable bonds of family, and this family’s enduring love for one another.”

—Ruth Nolan, born in the I.E. and editor of No Place for a Puritan: the Literature of California’s Deserts

“Tales of an Inland Empire Girl, set in the fast-growing Eastern region of Southern California and told in Mantz’s smack-in-your-face honesty, lures one into the places of childhood––of first home and lasting memories. One learns to live, however awkward life might be, in a house ‘the color of dirt’, finding a place to call one’s own in a Plastic Cheese chair, and love, even through girl fights. Through dexterous use of language, Mantz tosses her readers into a reality where a little girl finds herself in tears of frustration and shame with two left shoes, a drunken dad and screaming mom, but loves deeply anyway, and deals with her situations with twin-powered bravado and punk rock: ‘I feel as if I could dance forever,’ says Mantz.”

—Hồng-Mỹ Basrai, author of Behind the Red Curtain

“Tales of an Inland Empire Girl is deep and funny and true. A remarkable story of resilience and love told in bright prose, and written from a place of rigorous vulnerability that draws us in from the start.”