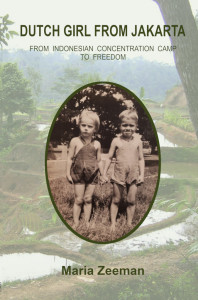 After years of working with a grief counselor, Maria Zeeman, now eighty-four years old, took the advice of her daughter Loretta and joined a writing class for seniors. Loretta felt that putting thoughts on paper would help her mother soothe the emotional scars left from childhood experiences as a prisoner of war during the Japanese occupation of Indonesia during World War II.

Maria’s father was a Dutch harbor pilot in Java when the Japanese invaded the islands in 1941.  Shortly afterwards, the Japanese moved all of the Dutch and other European civilians into prison camps for the duration of the war.  Men, women, and children were separated without warning or explanation.

Maria and her younger siblings endured the brutal conditions of the Tjideng prison camp run by the infamous Captain Sonei Kenichi.  Maria writes of fear, hunger, disease, and abuse.  Miraculously, Maria, her seven siblings, and her parents all survived and were reunited after more than three years.

Like others after the war, Maria fought to reclaim a life—going to work, going to school, getting married and having children.  But the early trauma left deep scars—emotions that Maria came to realize were symptoms of PTSD.

Maria’s zest for life and her habit of reflection are apparent in her story, “You’re Never Too Old to Learn.”

Serendipitously, the publication of this book coincides with the 50th anniversary of Maria’s arrival in southern California.  Her published story is a fitting way to celebrate her life’s victories.